CURRENTLY CLOSED: William and Evelyn De Morgan: 'Two of the Rarest Spirits of the Age’

No need to book tickets in advance. Purchase on the day from the Laing shop.

This exhibition will still be on show when the Gallery reopens.  We will confirm that date soon.

Sir Edward Poynter, President of the Royal Academy, described married couple William and Evelyn De Morgan as ‘two of the rarest spirits of the age’.

William De Morgan was undoubtedly the most intriguing and inventive ceramic designer of the late Victorian period. He was life-long friends with William Morris and Edward Burne-Jones and created stunning arts and crafts tiles and ceramics to complement their fashionable designs for interiors. William was the son of a mathematician and had a classical art training at the Royal Academy School. As a result, he always underpinned his elaborate designs with geometric structures, borrowed from medieval design and Islamic art. These complex influences on his art are explored in this exhibition.

In 1887, William married professional artist Evelyn Pickering. Her remarkable paintings bear the influence of early Italian Renaissance art as well as that of her Pre-Raphaelite contemporaries, yet have a distinctive style. Her unique paintings also projected her political concerns. She was deeply affected by the outbreak of the First World War, and created many pictures in response to the conflict. This exhibition showcases her peace paintings and the preparatory drawings she made for them, giving an overview of her working process and ideals.

This exhibition explores the exceptional work created by this pair of very different and equally intriguing 19th/20th century British artists.

The exhibition has been produced by the De Morgan Foundation. 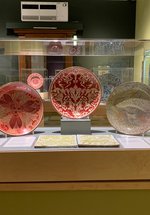 A curator's guide to the work of William De Morgan