This is a historic exhibition. It is no longer available to visit and this page is only retained as a record of the previous event. For current and future exhibitions, visit our What's On page.

An extraordinary documentary narrative, this exhibition is the first major account of the AmberSide Collection. 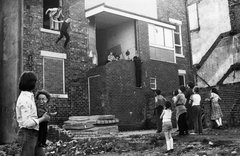 Opening up an extraordinary documentary narrative, this exhibition is the first major account of the AmberSide Collection started by a group of like-minded students at Regent Street Polytechnic in London in 1968. With a resolve to collect documents of working class culture, Amber Collective moved to the North East of England the following year in 1969 and in 1977 opened Side Gallery where it remains today.

In 1982 a Channel 4 franchise enabled Amber to grow its ambitions in filmmaking and 45 years later it’s still producing, commissioning, supporting and collecting. The Amber films and photographs of collective member Sirkka-Liisa Konttinen have been recognised by UNESCO, and, for the first time since its beginnings, this major exhibition at the Laing celebrates the full story.

Photographs by Graham Smith, Chris Killip, Martine Franck, John Davies, Tish Murtha, beginning in the 1970s and continuing through to the present are shown alongside the contemporary international work Side has collected and exhibited. This includes Sander, Doisneau, Weegee, Russell Lee, Susan Meiselas, Eugene Richards and Graciela Iturbide, amongst others. Rooted in documenting the vernacular and cultural life of working class and marginalised communities in North East England, this remarkable archive is a conduit for engaging with international documentary photography and film and socially excluded communities worldwide.

‘For ever Amber’ is a partnership between Amber Film and Photography Collective and Laing Art Gallery, with support from Tyne & Wear Archives & Museums.

The title of the exhibition is taken from an inscription by Henri Cartier-Bresson on a photograph that he donated to the Amber collection.